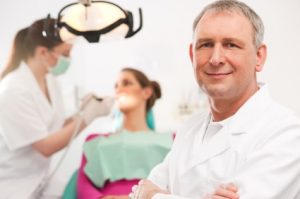 Periodontal disease is not as common as it once was, but it is still more common than you might think. At Harris Dental in Phoenix, we see patients with gum disease more often than we like.

Some patients aren’t even aware they have it until it’s diagnosed. That’s because in its earliest stages, gum disease doesn’t give many signs. It does give a few, though: tenderness in the gums, and a little bleeding when you brush. Fortunately, it can be treated.

Gum disease is an inflammation or infection of the gums. In its mildest form, it is known as gingivitis. The more serious variety is periodontal disease. It can be very painful in extreme conditions, and limit your ability to eat normally. In severe cases, it can result in tooth loss.

Both gingivitis and periodontitis raise your risk of such conditions as diabetes, heart disease, and cancer. As with most ailments, early detection is key to treatment.

Treatment
After we diagnose gum disease, the first task is to control it. The first step is a careful, in-depth cleaning that goes beneath the gum line. We’ll use special instruments in a deep cleaning.

A procedure called scaling is the removal of tartar both above and below the gum line. Root planing smooths out any rough surfaces of the roots of your teeth.

In addition to these, we may prescribe oral gels and other medications.

If deep cleaning doesn’t fully correct the issue, we may recommend surgical procedures like gum grafting or flap surgery.

Gum disease is a serious matter, but the thing to remember is that most cases are treatable, especially if it is diagnosed early enough. Harris Dental in Phoenix provides gum disease treatment, as well as general and cosmetic dentistry.

HOW IT WORKSNote: Mobile message and data rates from your cell phone carrier may apply.